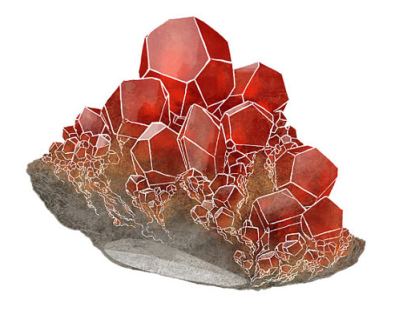 “The origins of birthstones is believed to date back to the breastplate of Aaron, which contained twelve gemstones representing the twelve tribes of Israel. The current list dates back to 1912 with only one addition since then – the tanzanite was added to December.”  – The American Gem Society

I wanted to start expanding my own knowledge of gemstones and minerals and thought that focusing on each month’s birthstone would be a great way to dig in.  Before January slips away, I wanted to find out a little more about garnet!

Color: red is common but garnet comes in virtually all colors
Mohs Hardness: 6.5-7.5

Garnet signifies eternal friendship and trust and is the perfect gift for a friend.  The word Garnet was derived from the word granatum – which means seed.  It’s called this due to the gemstones likeness to a pomegranate seed. Historical references to garnet date back to Egyptians in 3100 BC when it was used to inlay jewelry.  Though its most associated with the color red- the name represents a group of minerals available in a rainbow of colors – from deep red to vibrant green. It’s most commonly sourced in Africa, Sri Lanka and India.

It’s revered and prized for its strong curative properties and protective energies. It’s known as a source of creative energy and is a sensual stone representing the primordial fire, the creation of the world out of chaos, purification and love. It’s thought to reduce bodily toxins, regenerate the body and stimulate the metabolism.

According to Crystal Vaults, the stone has been said to help with the cardiac rhythm, acne, low libido and even relieve rheumatic and arthritic pain.  Garnet can help sharpen your perceptions of other people – allowing you to open up the heart and bestow self-confidence. It’s known as a stone of commitment – boosting devotion and understanding.